Carolyn Newberger is an artist and writer following a career in clinical and research psychology at Boston Children’s Hospital and Harvard Medical School.  Carolyn grew up in Pittsburgh, Pennsylvania, and attended Sarah Lawrence College. She married Eli Newberger in 1962 and worked as a teacher while he attended medical school. In 1967, she and Eli traveled to West Africa with their infant daughter for two years in Burkina Faso (Upper Volta), where Eli was the Peace Corps doctor.

After returning from Africa, Carolyn earned a doctorate in Human Development from Harvard University and trained in clinical psychology at the Judge Baker Children’s Center and Children’s Hospital, both affiliated with Harvard Medical School.  After completing her graduate training she continued on the Harvard Medical School and Children’s Hospital faculty and staff doing research, teaching, and clinical practice.  She has written over 35 publications related to child and family development, social policy, and the effects of child maltreatment on children and families. She has received the humanitarian award from the Massachusetts Psychological Association, the career achievement award from Sarah Lawrence College, fellowships from the Danforth Foundation and the Bunting Institute at Radcliffe College, and the Family Legacy Award from Family Service Association of Greater Boston. 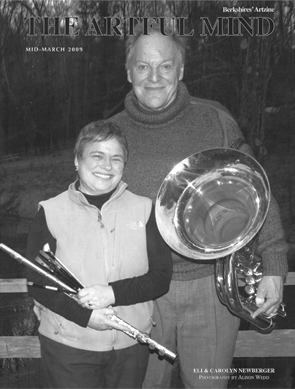 In addition to professional and research articles (view Curriculum Vitae), Carolyn Newberger has published book reviews, op.ed. pieces, and essays in the Boston Globe as well as other magazines and newspapers. More recently, she has published autobiographical stories and essays, as well as illustrated music and dance reviews in The Berkshire Edge, a local newspaper (view stories here), as well as a series of illustrated essays about the forest, entitled “Illuminating the Hidden Forest.”

In 2003, Carolyn discovered that her childhood love for and talent as an artist resides in her still, and she jumped right in.  She won her first prize as an artist within a year, and continues to explore new media, deepen her artistic vision, and experiment with ways of capturing the essence of an emotional and visual experience.

Carolyn Newberger ’63 spent decades forging a dual career in research and teaching. Since then, she’s forged another as an artist and writer.

On the music side, Carolyn studied flute with Bernard Goldberg, principal flute with the Pittsburgh Symphony Orchestra, and Samuel Baron, music director and flutist with the Bach Aria Group in New York.  Although she has continued to play flute professionally and avocationally, she picked up her piccolo again in 2006 to performed with the Cupcake Philharmonic Orchestra, a chamber ensemble that performs “Tubby the Tuba,” among other modern works.  She currently plays jazz washboard with her husband’s band, Eli and the Hot Six. Watch her now on washboard in Gershwin’s “Strike Up the Band” at Sculler’s Jazz Club on December 17, 2015.

For Bella English’s article in the Boston Globe on Eli and Carolyn’s life in medicine and music, click here.

In these pages, Carolyn invites you to view her paintings and drawings and to enjoy her essays and personal memoirs on the forest, music and dance performance, and life’s difficulties and complexities. You can also listen to “Tubby the Tuba” with the Cupcake Philharmonic Orchestra and to her performances with Eli and the Hot Six, and sample writings on her research and clinical insights into the lives of children and families,

View examples of her work.